Approximately two years ago, Apple introduced the butterfly mechanism keyboard to MacBooks delivered in 2015. The mechanism was also adopted by its MacBook successor that was delivered in 2016. It was deemed as a failure with a lot of users reporting issues of the MacBook keyboard not working, repeating characters, and a host of other shortcomings that vandalized Apple’s previous success with the MacBook series.

After months of negative reports by the press involving the repairing costs and the horrific stories of its misfiring, Apple came out and confirmed that indeed there was a problem with the new butterfly keyboard installed on the MacBook and the MacBook Pro. Worse yet – other issues such as its trackpad, USB-C, and speakers were also having faults on some Macs.

What is causing the MacBook keyboard issue? 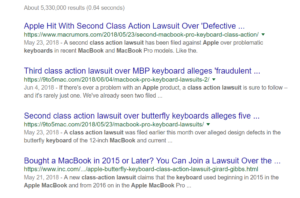 The reason for the faulty keyboard has not yet been fully answered, but as some technicians simply describe the root cause as dust and small particles. It would appear that dust, dirt, and other small particles can get trapped under some keys (especially the spacebar one), causing the Mac’s Pro keyboard issue.

But the butterfly mechanism is prone to technical failures because of how the slim design affects the keyboard functions and the butterfly mechanism in play. It was bound for success, but ultimately it showed a high rate of failure when pitched against previous MacBook laptops. If you happen to own a MacBook Pro that has developed keyboard issues and was wondering how to sort it out, the following guidelines below should help you do just that.

Getting your Mac fixed for free (by Apple!)

To get a more resolute and permanent fix, Apple will do the repairs for you, and you will be back on track to enjoying a more refined keyboard experience with your MacBook. Apple finally came out (took long enough) after the damage was done to help users of the Mac get their keyboard fully functional.

This involves fixing some models of the Mac for free. These models include:

If you happen to own one of the above models and it has developed a MacBook keyboard issue, be sure to contact an Apple Authorized Service Provider.

If you’re unsure about which Mac you have, you can find out here.

You could also schedule for an appointment at your nearest Apple retail store or better yet just send your MacBook to an Apple Retail Center. Once you do that Apple will authenticate if indeed your Machine is entitled to repair. If so, Apple will then do the repairs free of charge. It is worth noting that you should back up your files to avoid any loss of data during the repair. The advantage associated with using this method of repair is not only the lack of cost but also a professional repair resulting in a long-term solution.

Fixing the Keyboard Yourself

If your Mac is not covered above, then you might just be able to fix your laptop by doing so yourself. Apple itself released a statement acknowledging this fault and recommended that users of the MacBook with faulty keyboards to blow the dust from underneath the keyboard by using compressed air. Since dirt and other small particles can creep into your keyboard, Apple reckons that this problem can easily be solved by using compressed air to blow out the particles and dust.

The dust particles might have stuck underneath the keyboard keys, causing the pressure distribution to become uneven, hence causing the problems you’re experiencing such as repeating characters and other keyboard keys not working. Some users have also reported that when using the keyboard, one should be a bit heavy handed when typing and keying in characters. Some have even gone as far as using their fingers to hit the keyboard to fix the Mac’s Keyboard unresponsiveness. 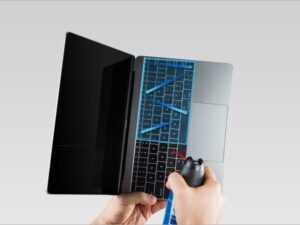 If this doesn’t work for you, you should try Apples recommended technique on how to clean your Mac’s keyboard. They say you should hold your laptop in a 75-degree angle. After that, use compressed air to spray the keyboard frequently on the affected area of unresponsiveness. You can do this as you rotate your Mac to its right side while still spraying. Repeat this action but this time to the left side of your Mac.

Although doing this would be but a quick and short-term fix to your Mac Pro, it would be almost impossible to eradicate the dust and other particles without removing the whole keyboard.

But it must be noted that the above-mentioned fixes are only short-term fixes to the unresponsive keyboard problem.

Other Alternatives to your Mac keyboard

If your Mac is not covered under warranty or is not eligible for the free fix mentioned above, then you still have a few more decent options – pay for a repair or buy a better separate keyboard.

The cost of getting your Mac keyboard fixed by Apple

If the warranty covering your Mac has expired, you could also get the repair done on your Mac’s Pro keyboard issue but at a fee.

Reports have it that this fee is in the region of a whopping $500 or more!

Unfortunately, you cannot just show up to the store and request for repairs. You are supposed to schedule an appointment either by going online through Apple’s website or by using the Apple store app to book the appointment. You could also go to a second-hand repair shop for a lower cost (but at a higher risk)

Getting your Mac its own Keyboard

Alternatively, you can get other keyboards that are Mac compatible. Although this can be quite a hassle, you would be ensuring yourself a long-lasting and durable keyboard.  Not only would it be a fraction of the price of repairing, but it would also be portable and reusable for other devices (such as PCs).

Here are some great ones we recommend checking out:

On the other hand, if you want something with switches akin to the butterfly keyboard, we highly recommend checking out mechanical keyboards that are Mac compatible. Check out a good mechanical keyboard list here. After spending more than $1,000 on your Mac, nothing is worse than having its keyboard nonfunctional. Apple designs are unique and marvelous, but have been faulty and can suffer a couple of glitches here and there. We can only hope that future versions will be better.